1866 Superintendent at Stroud.
January 1857 from Campden to Stow.

13th June 1845 for disobedience of order and neglect of duty in not having the station house at Cheltenham cleaned at the proper time. Fined £1. 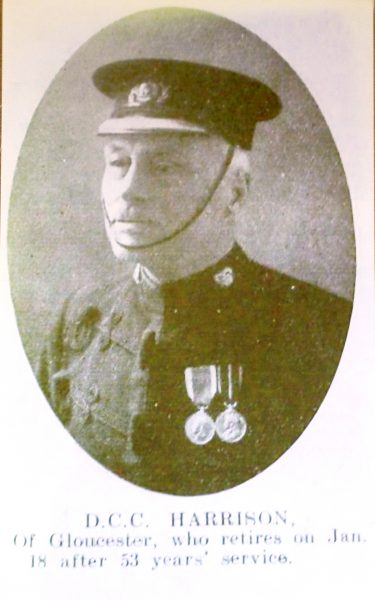 24th April 1880 apprehending in company with Constable Packer after a determined resistance during which they were both wounded, two men named Thomas Davis and Albert Blandford who were drunk and disorderly at Stroud. The good conduct of Sergeant Harrison and Constable Packer with which I am much pleased will be duly noted. 2nd May 1880 Henry Christian.

20th June 1888 bringing two principals in in a prize fight at Berkeley to justice after they had got away from the district undisturbed. Superintendent Harrison deserves great credit for the manner he has worked this case up. 21st June 1888 Henry Christian.

27th August 1896 disobedience of orders. I cannot express my disapprobation of Superintendent Harrison’s conduct on this occasion too strongly.
I had previously told him that the police were not to bring anything before a public court unless they were able to prove it, not withstanding this a few days afterwards he repeats the same thing in his report to the justices at Stonehouse.
I erased and marked this as disapproved and yet when asked in Court if he had any remarks to make he repeated the complaint which I had objected to.
I can assure Mr Harrison that it is only his long and admirable previous service in the Force which prevents my dealing with him most severely. 30th August 1896 Henry Christian.
A copy of my letter to Mr Howard on this matter is forwarded to Mr Harrison.

20th August 1875 apprehending J Steele who had committed a burglary at The Crown Hotel Gloucester. In consequence of this man’s good conduct on this occasion and also taking into account his previous good character I have much pleasure in promoting him to 1st Class Constable. The promotion to date from the 1st September. 13th September 1875. Henry Christian.

11th December 1860 for being drunk when on night duty at Stroud. Not punished on recommendation of his Superintendent for his previous good character.

Joined the 1st January 1840.
Ordered to resign on the 1st May 1847 it having been discovered that he made false entries in the diaries in his district.

Ordered to resign on 1st October 1841 in consequence of telling a falsehood to the Chief Constable respecting a letter which he had lost on the Gloucester Road.

Ordered to resign on 1st July 1844 for making a false report to the Chief Constable respecting a case of sheep stealing at Gloucester. 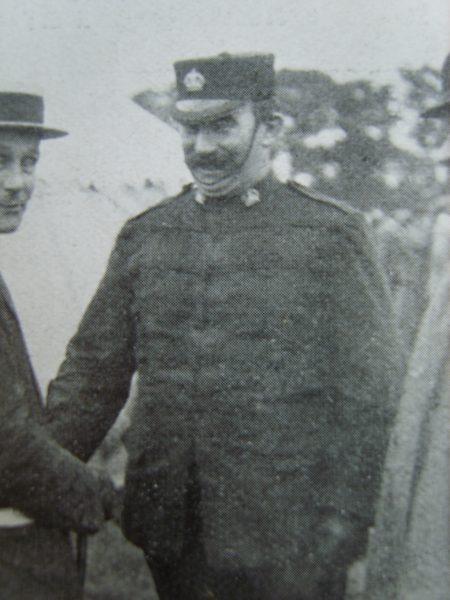 July 9th 1888 for detecting and arresting when on night duty on the Gloucester Road Cheltenham on the 8th July 1888 two young men named Charles Dix aged 19 years and William Mahon aged 21 years for committing a garden Robbery who were subsequently committed for 1 month and 21 days Hard Labour respectively.
A creditable case to be noted. Promoted to the 5th Class July 1st Henry Christian.

April 15th 1896 arresting William Griffiths near Gloucester with a bicycle in his possession which he had stolen at Cardiff. Sergeant Jones was subsequently complimented by the Cardiff magistrates on his smartness in this case.
A creditable case to be noted 16.4.96 Henry Christian.

October 8th 1897 for displaying promptitude and good judgement in telegraphing for information from Gloster which led to the arrest in London of a notorious bicycle thief named Torino Achillo wanted at Gloster and several other towns. At the trial the recorder complimented Sergeant Jones on his smartness and good judgement.
This is a very creditable case to be noted Henry Christian.9.10.97

July 18th 1898 arresting Louis Lucas with a stolen bicycle in his possession at Gloucester. This man being wanted at about twenty different places over similar charges.
A very creditable case to be noted 19.7.93 Henry Christian.

July 25th 1899 arresting a man who gave the name of Abraham Cohen alias harry Owen who had stolen a watch from a man’s coat on the main road near Berkeley. He was also wanted by Bristol city police for stealing the bicycle which he was riding when arrested.
A creditable case to be noted 28.7.99 Henry Christian.

31st July 1903 complimented by the Winchcomb justices for thorough way he prepared a case under the Licencing Act 1872 at off licenced Beer House at Buckland. I am much pleased with the efficient manner Superintendent Jones has got up this case. To be noted 1st August 1903 Henry Christian.

6th November 1908 complimented by the justices at Moreton for the efficient and thorough manner that a case of attempted burglary had been got up. See Sergeant Durham and Police Constable Attwood. A very creditable case to all concerned to be noted. 7th November 1908 Henry Christian.

13th July 1913 neglect of duty. Reduced from the first to the second grade of second class Superintendent from the 1st inst.

Pensioned 31st January 1914 having been certified to be medically unfit for further police service.

9th March 1841 dismissed for cresting a disturbance at Winchcombe also leaving his wife and family chargeable on the parish.

Promoted to the rank of Superintendent 1st Class 12th December 1839.
Promoted Deputy Chief Constable on 7th July 1840 with an additional salary of £20 per annum.

His career in Gloucestershire was somewhat chequered. The Cheltenham Examiner reports that a charge of immorality preferred against this officer by Ann Seabourne , a girl in his employ as domestic servant. He was reinstated after suspension as the case was dismissed.

Dismissed on 24th June 1853 he having absconded with £485 9/4d public money belonging to the county of Gloucester which was the wages for the constabulary. Neither he nor the money was found.

The Gloucestershire Chronicle on 21st December 1839 states that he was one of the first constables sworn in. The same publication  reports on 7th November 1846  that as Superintendent of Stroud he absconded as a defaulter owing money.

14th April 1848 for being under the influence of liquor at Newnham as reported by himself.
I regret very much this has occurred and I am satisfied from the manner Superintendent Lauder expresses himself that a reoccurrence of this will not take place. Anthony Thomas Lefroy Chief Constable 21st April 1848.

2nd June 1848 for gross neglect of duty in not having visited his stations by night as frequently as he should have done. Fined £3.

9th March 1849 for neglect of duty and disobedience of orders in not reporting several cases of sheep stealing and other serious offences to the Chief Constable.

Allowed to resign without pay to 1st April 1849. Whatever the reason for his resignation, in July 1946 he was considered for the position of Governor for Hereford Gaol. he was not successful.

9th February 1856 severely reprimanded for not properly performing his duty during the month of January last by neglecting to visit his out stations by night. By the Chief Constable.

29th May 1856 for neglect of duty in neglecting to make proper arrangements for the protection of Public Property at Wottonunderedge on the 22nd May 1856. Case dismissed by the bench of magistrates at Wottonunderedge.

1st January 1857 reduced to 2nd Class Superintendent and sent to Campden from Dursley not being considered active.

Promoted Sergeant on 1st July 1843
Promoted Superintendent on the 1st May 1847.

Resigned on the 15th July 1850 in consequence of ill health.

3rd January 1866 absenting himself from the Shire Hall for half an hour when wanted to go before the Grand Jury. Fined 2/6 Henry Christian.

22nd April 1875 drinking in a private house in Gloster when on duty with Police Constables Hook and Vick. Sergeant Matthews acted injudiciously in allowing two men who were on duty to go into a private house and accept drink! He was also wrong in doing so himself.
I am of the opinion however that this will be a lesson to the sergeant and that he will make up his mind never again to accept drink from anyone.
Sergeant Matthews may depend that as long as he does his duty strictly and honestly as he has hitherto done he will have the support of those placed above him. 3rd May 1875 Henry Christian.

11th October 1889 protecting the Bristol Gas Woks at Eastville during a strike of the workman from the lawlessness of the mob. I am much pleased with the arrangements made in the case of Mr Matthews and also with the manner the police under him acted. 12th October 1889 Henry Christian.

15th September 1889 bringing a man and his wife to justice who had stolen £160 at Cheltenham for which they were sentenced to 3 months hard labour. This case is a very creditable one to Superintendent Mt McRae and Sergeant Woolford. Henry Christian 23rd September 1889.

The superintendent has not signed this application. I regret to say that several of his reports have been forwarded to this office in a very imperfect state which shows want of proper attention on the part of Superintendent Monk. I hope I shall not have to remark on this subject again.
1st July 1862 Anthony Thomas Lefroy Chief Constable.

Being found lying down in the street at Campden drunk without his hat and covered with dirt and not reporting Police Constables Hurcombe and Reed for fighting with their staves at the Campden station.
In consequence of a severe illness which has confined me to my bed and incapacitated me from doing my duty I have hitherto been prevented from giving a decision in this case.
Having carefully considered the enclosed evidence, I can come to no other conclusion than that Mr Monk was drunk on the night of 12th January and that he was guilty of a serious breach of discipline in not reporting the outrageous conduct of Constables Hurcombe and Reed.
This is one of the most disgraceful occurrences which has taken place since I have been connected with the Police Force of this county and I am doubtful whether I am doing my duty in not dismissing Mr Monk from the Force. I will however take his former long service and good conduct into consideration and take a lenient view of his case, with the hope that a severe reprimand will be sufficient to deter him from ever being guilty of such in future.
I trust that Mr Monk will appreciate the leniency thus shown him and induce him to strive by his future good conduct to wipe out the disgrace he has brought on himself and on the good name of the Police Force of this county.
I must also express my extreme disapprobation of Sergeant Pope’s conduct in this affair.
Henry Christian Captain RN Chief Constable. Cheltenham May 17th 1872.

1st November 1873 being under the influence of liquor at Chipping Campden.
The charge of drunkenness made against Superintendent Monk has been clearly proved.
Superintendent Monk is reduced to the rank of Sergeant from December 1st 1873 and will proceed to Westbury on Trym on Friday 5th December.

I trust and hope that Mr Monk will endeavour by strict temperance and the earnest discharge of his duty to regain the character he has lost. He must make up his mind to be dismissed from the force if he is again reported for a similar offence. 1st November 1873 Henry Christian.

23rd February 1888 not properly investigating an alleged robbery of barley at Poulton Priory the property of Mr Marshall. Mr Marshall has very good cause to complain of the police in this case.
I have to express my great dissatisfaction at the way Superintendent Morgan did his duty in this case. By his own showing he did not make the slightest enquiry into this matter personally.
In future he will enquire into every case reported and instruct the men under him how to proceed.
I trust that I shall not have to find fault with Superintendent Morgan for remissions in doing his duty again 24th February 1888 Henry Christian.