2nd May 1848 for neglect of duty in not seeing the Barrack Regulations properly attended to at the Berkeley Station. Fined £2 and if a similar occurrence takes place he will be dismissed.

September 1853 removed from Dursley to Cheltenham to act as Deputy Chief Constable.

Reduced to constable on 27th January 1840 for neglect of duty in allowing a prisoner to escape at Stow.

1st July 1903 arresting 10 men for rioting at Berkeley when labour dispute was on at Sharpness Docks and were committed for trial. I am most pleased with the efficient way Superintendent Perkins worked up this prosecution and the subsequent enquiries for the Metro Police. 2nd July 1907 Henry Christian. 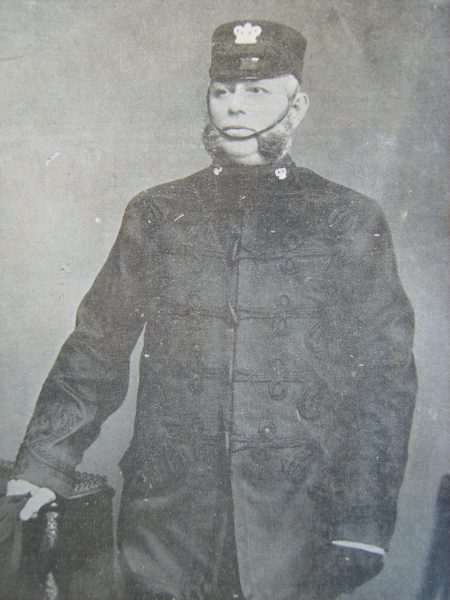 1st March 1859 absenting himself for 8 hours longer than he should have done when sent on duty from Gloucester to Nettleton. As this was his first offence he will not be punished but if again reported will be severely punished. Anthony Thomas Lefroy Chief Constable.

9th October 1860 not reporting to his Superintendent Mr Coleman relative to a pane of glass broken in the Reverend Mr Townsend’s window and the gate of the churchyard at Bishops Cleeve being broken. If again guilty of such gross neglect of duty he will be removed from charge of a station at once. Anthony Thomas Lefroy Chief Constable.

10th January 1887 working up a case of murder against Edward Pritchard and William Noyes at Stroud. I cannot allow this case to close, as far as the police are concerned without expressing my high appreciation of the admirable manner Mr Philpott got it up. Henry Christian 11th January 1887.

Called upon to explain why some entries made by him in the diaries at Thornbury and other statements in his district were written in so disgraceful a manner.
I consider the excuse made by Superintendent Rawle worse than the deed itself however the latter part of his explanation is satisfactory, consequently I trust the Superintendent will be more particular for the future. Anthony Thomas Lefroy Chief Constable 29th January 1881.

1st January 1845 discharged for quarrelling and being impertinent to the Deputy Chief Constable Mr Charles Keily.

24th October 1847 for immoral conduct with Emma Millard a married woman in the Staple Hill sub district. Taken before the magistrates and severely reprimanded.

26th July 1862 for allowing a female prisoner named Ann Hayward under remand foe larceny to escape from his custody at Sodbury. Not punished as the female was retaken. Severely reprimanded.

24th August 1869 for being drunk at an inquest at Dursley held by William Gaisford Esq Coroner. Reduced to the rank of Sergeant and removed to Stroud.

23rd March 1859 Removing the shutter breaking the window of the shop of Mr Cotta at Stroud on the night of 23rd March and removing therefrom a clock and some trinkets. Reduced to Second Class Superintendent and removed to Stow on the Wold. 5th April Anthony Thomas Lefroy Chief Constable.

The Cheltenham Chronicle 5th April 1859 reports that a charge had been brought against Superintendent Seys for neglect of duty which was heard at Stroud Town Hall.  The case was  discharged as the superintendent was found not to be drunk just indiscrete.

Superintendent Seys must pay more attention to the writing of his reports and coroners notices which are provided to this office. I regret to see such a one as this forwarded by him and hope the one to the coroner was not like it.13th February 1864 Anthony Thomas Lefroy Chief Constable.

On Friday 5th August 1864 on the Chief Constable visiting the Coleford Station in company with Captain Willis the Government Inspector of Constabulary he received a complaint from Mr D Smith against Superintendent Taylor that he had seduced his (Mr Smith’s) daughter.
The Superintendent was written to on the 7th and suspended and a copy of Mr Smith’s letter sent to him. J Fortescue Brickdale Esq and General Woosenam Justices of the Peace met Mr Lefroy by appointment on Monday the 15th inst. When the Superintendent tendered his resignation which the Chief Constable accepted and entered the following minute thereon.
Accepted in consequence of his length of service and previous good character to which J Fortescue Esq and Major General Woosenam JP who attended to investigate the charges against the Superintendent with me. 15th August 1864 Anthony Thomas Lefroy Chief Constable. 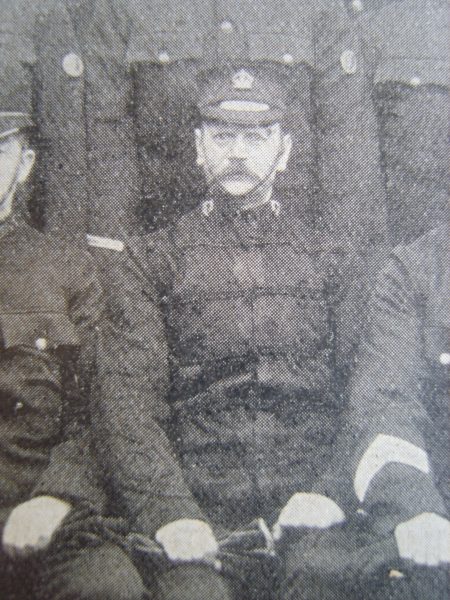 28th April 1902 for the creditable way he conducted a case against Albert E Selby and Richard Enoch under the betting act for which the former was fined £100 and £5 19/6 costs and the latter was bound over. also complimented by the justices. Superintendent Webb and also the other officers engaged in this case deserve great credit for the efficient manner this case has been worked. 29th April 1902 Henry Christian.

Dismissed August 17th 1871 for neglect of duty in not visiting his stations in the Forest District at night according to the circular order and making false returns of duty to the Chief Constable.

Resigned 1st July 1855.Newspaper reports of the time show that there was a court case and he had to resign because he took liberties with Mrs Gordon the wife of a policeman. He had been  appointed to replace Deputy Chief Constable Charles Keily who absconded with the Constabulary payroll.

6th December 1854 for allowing a prisoner to escape from his custody when policing him in the lock up at Tetbury. The prisoner was afterwards retaken.
Taken before the magistrates and cautioned as to his future conduct.