Throughout the war there were many instances of heroic deeds carried out by both Regulars and Specials from the Gloucestershire Constabulary.

In some instances, these deeds were marked by medals and in others by commendations, but it is likely that there were many more acts of bravery that went unremarked. On a daily basis Gloucestershire Police concerned themselves with the safety of the civilian population and earnt a great deal of respect from most members of the public. The following are some examples of notable acts of bravery recorded during the war years.

In 1939 at a cottage in Coleford a fire broke out in the early hours of the morning. Two Special Constables Prisk and Williams along with Regulars Police Sergeant Taylor and Police Constable Bullock from the Forest of Dean Division, attended the fire where four out of the eight elderly residents were trapped upstairs. The police used a ladder to reach the bedrooms and despite the smoke and fire were able to lower three of the four trapped residents to the ground. The fourth resident sadly perished before she could be rescued. For their Acts of Gallantry, the two Special Constables were awarded Silver Braids, which hitherto had only ever been awarded to Regular police officers. The two Regular Police Officers were also awarded Silver Braids. 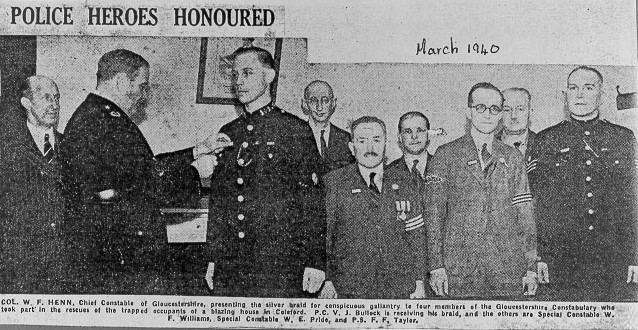 In 1940 Special Constable Hulbert of Staple Hill B2 division was driving in his car to take up his duty, when he was blown into a ditch by the blast of an exploding bomb. He left his car and proceeded on foot with bombs falling around him. Coming across a house that had been set on fire, he attempted to put out the fire, helped only by the one disabled occupant. Finding he was not succeeding, Special Constable Hulbert reported to the Police Station then returned to the scene. He remained on the roof of the house, dealing with the fire, until ordered to come down by the Regular Police inspector and just two minutes later, the roof collapsed into the building. Special Constable Hulbert was presented with an award for Gallantry and the Silver Braid.

In 1941, an unnamed town in Gloucestershire, of apparently no military strategic importance, was erroneously attacked by a German night raider. Several incendiary and high explosive bombs were dropped and two private dwelling-houses received direct hits killing two people. Other residences and business premises were also extensively damaged and there were a number of non-fatal casualties. Nineteen Specials and two Regular officers attended the scene and at a significant risk to themselves extinguished a large oil incendiary bomb and rescued a lady who had been trapped in one of the demolished buildings. This all took place whilst enemy aircraft were still flying overhead. It is of note that it was the third time that this same lady had been dug out from bombed buildings and on this occasion, she narrowly missed being crushed to death as a fallen beam fortuitously formed a protective archway over her bed. All of the police involved in these incidents received honours and Police Sergeant Hill received an additional award for gallantry.

In a separate incident in 1941, two Special Constables, Fluck and Dyer were on duty at St Mark’s Police Station, Cheltenham when they received news of an Army deserter who had escaped from Military Custody. The deserter was described as a “six feet seven giant,” of dangerous character and armed with three loaded revolvers. Specials Fluck and Dyer went out to search for the man and found him not far away walking with an airman in the town. Fortunately, the man offered no resistance and admitted his identity. The Specials arrested the man and on conducting a search discovered the loaded weapons. Both Specials received Distinguished Conduct Awards for their part in the deserter’s apprehension.

Also, in 1941, Head Special Constable Hawkins and Special Constables Tandy, Dangerfield, Parr Taylor and Bartlett from Cheltenham, received Distinguished Conduct Awards for their roles in the following incident. A bus carrying a full load of R.A.F. airmen collided with a stationery lorry near Charlton Kings. The petrol tank of the damaged bus ruptured and the bus was quickly enveloped in a wall of flame. At the same time the collision jammed the door of the bus preventing the occupants from escaping. The Special Constables worked alongside the firemen in attempting to rescue the victims by smashing windows with helmets and bare hands. In spite of their efforts, eight RAF airmen lost their lives and were burnt beyond recognition. A ninth died of his burns in hospital and fifteen other casualties were treated for minor injuries.

Police acts of bravery were not always restricted to the human population and the RSPCA recognised exceptional courage, in the course of assisting animals, with a Bronze Medal. In 1943 PC Buckle of Minchinhampton received such an award when he saved a cat on the first of three occasions in that same year that he descended a well in order to rescue life. On the second of these occasions, he descended an old ice well at Gatcombe Park to rescue a dog and on the third occasion to rescue a boy who had sustained head injuries on falling down a well at Cherrington. However, not all animal rescue attempts by the constabulary were as successful. On a separate occasion in 1943, Regulars and Specials from the Forest of Dean division, crowded onto a railway trolley and careered madly down the line in order to rescue a cow that had fallen down a railway embankment. Unfortunately, their gallant rescue efforts failed as the cow died. In addition, several men ended up the worse for wear from sea sickness due to the violent sway of the trolley. 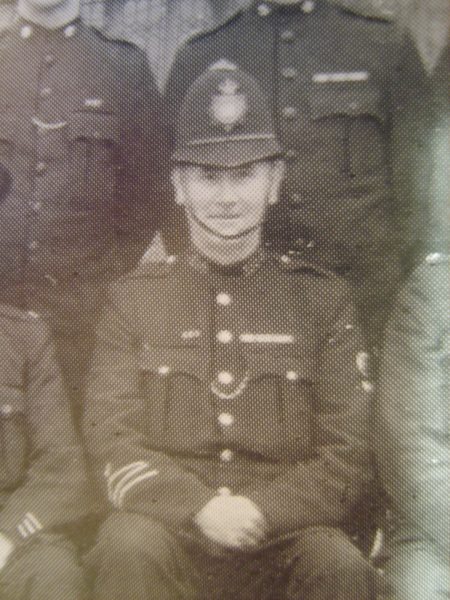