The entries for Haw Street include the Police Station with Sergeant Robert Porter and six constables. So it was established very soon after Gloucestershire Constabulary being set up in 1839. Robert Porter was born in Ireland.

1843 sale of the Queen’s Head and County Police Station

This appears to have been on the site of what is now The Royal Oak, where the sales notice is now displayed. Some of the buildings at that time have been removed. 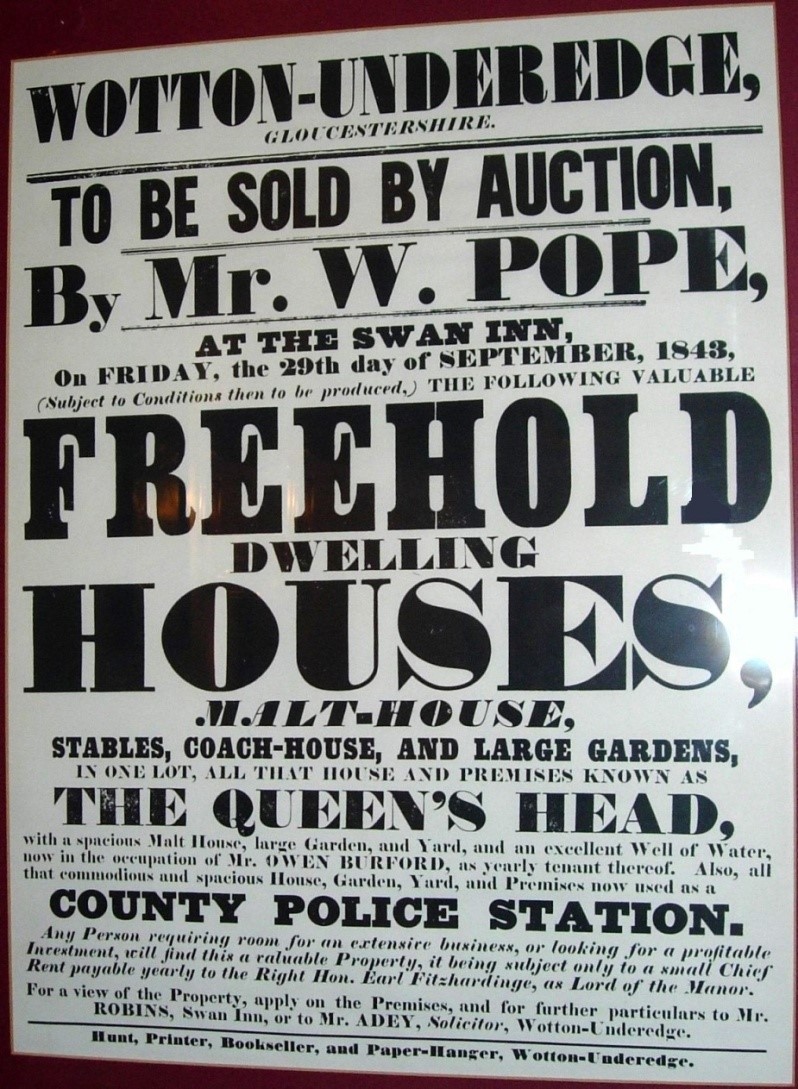 I have not been able to find the Queen’s Head named in any other document, which suggests it did not last very long. The 1847 Tithe Map (data from ca. 1842) shows the present Royal Oak site used as a weaving shop and occupied by Owen Burford (named above as the occupant). In a directory of the same year he is described as a beer retailer in Haw Street. (By 1863 he was living in The Steep, probably at the Shearman’s Arms.) It is not usual to name a pub after the reigning monarch but given the proximity of this to 1837 it may have been the case here.

This census lists the Police Station among other entries for Haw Street, so it would seem it remained in the 1843 position. It lists Sergeant John Watts, (Z-Cars!), born in Oxfordshire, his wife and three constables living there.  There were at least two other police constables, also living in Haw Street.

Traced from the 1864 conveyance showing it as The Royal Oak. It had been there since at least 1755. 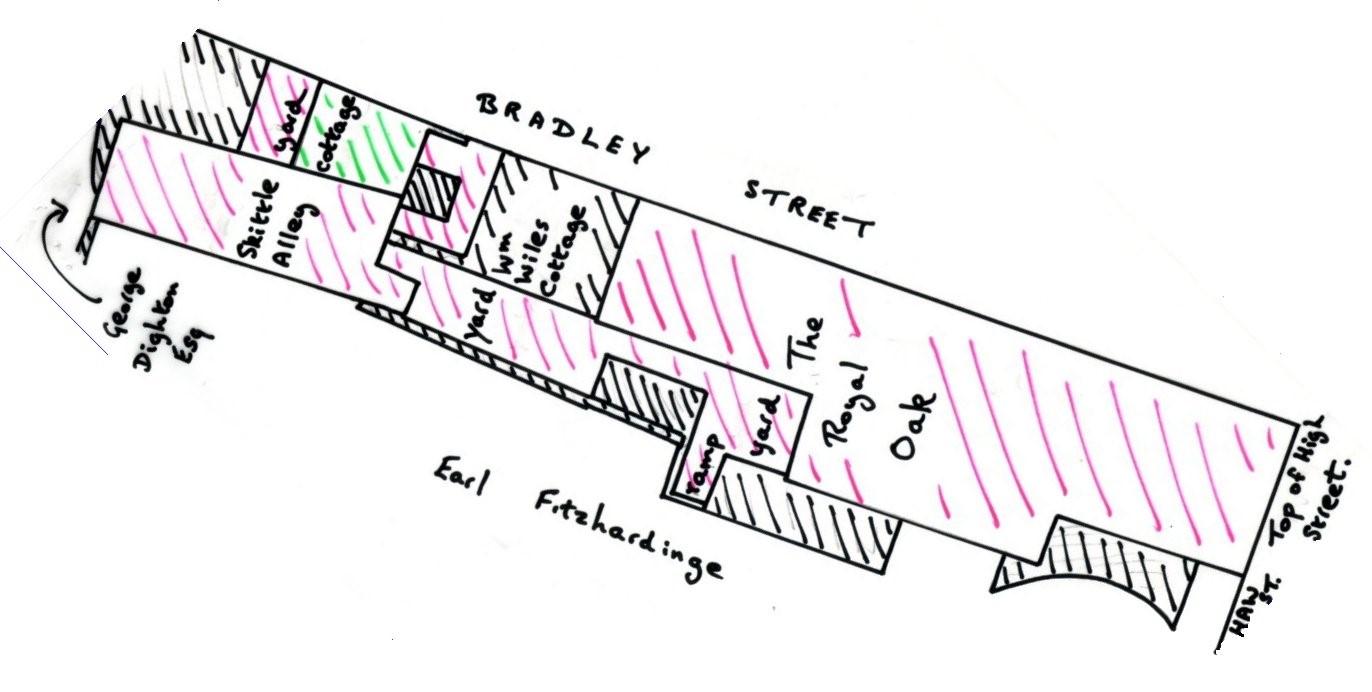 5th July 1864: It became the Police Station through a conveyance:

The Royal Oak Inn and Cottage adjacent thereto for a Police Station: The Trustees of Mr R Wiles deceased and others to the Clerk of the Peace for the County of Gloucester.

(Various parties) Do and each of them Doth grant sell release convey and confirm unto the Clerk of the Peace and his successors:

First: All that messuage tenement or dwellinghouse commonly called by the name or sign of The Royal Oak situate and being in the High Street in Wotton with the cellars, brewhouse, stable and outlets to the same adjoining and belong heretofore in the occupation of the said Richard Wiles, lately of William Wiles but now unoccupied.

Secondly: All that mess. Ten. Cottage or dwelling house with the appurtenances thereto belonging situate in Bradley Street, formerly in the occupation of      Brown, lately of Charlotte Carter but now unoccupied

… first shown in pink on the plan, second green.

Together with all houses, outhouses etc.

To have and to hold …. Subject to an annual quit rent to the Lord of the Manore of 8/4d … to the use of the Clerk of the Peace and his successors.

Conveyance of a chief or quit rent of 12s 0d issuing out of hereditaments in the County of Gloucester.

The Right Hon, Francis Wm Fitzhardinge, Baron Fitzhardinge and his Trustees to the Clerk of the Peace for the County of Gloucester.

… in consideration of £15 paid to Frances Edward Guise, Clerk of the Peace by the direction of Baron Fitzhardinge to Earl Bathurst, Robert Nigel Fitzhardinge Kingscote.. Baron Fitzhardinge … conveys to Guise all that chief or quit rent of 12/- per annum payable for that land… used by the County … as Wotton under Edge Police Station and Petty Sessional Court.

Somewhere there is mention of an Act that required the setting up of police stations throughout the county.

The photograph below shows the Police Station from High Street, with the name in raised lettering on the front of the building. Until recently the lettering was still visible despite efforts to remove it, but now it has gone, presumably chiselled away. 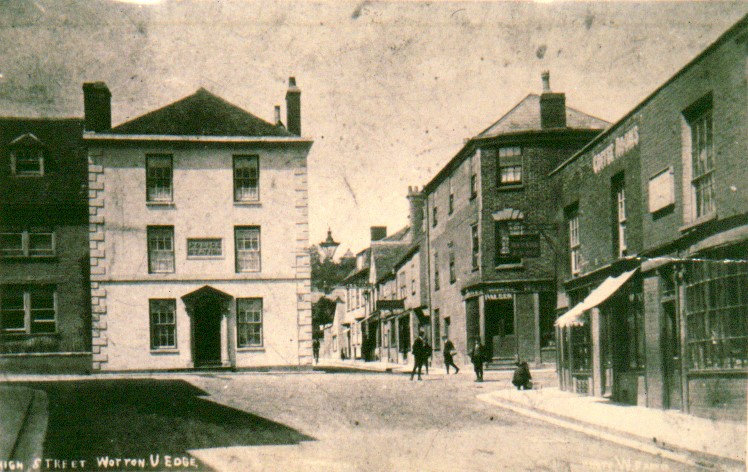 The street to the right of the police station is Bradley Street and the entrance to the Petty Session Court was on the left-hand side. The words Public Entrance on the lintel are still visible, now above a window.

I think another one named the Court but, if so, it has gone.

In directories etc. the position of the police station is variously described as being in Haw Street, Bradley Street and High Street.

[An architect writing about the town had the impression that it had been built as a police station remarking on its official looking appearance and strategically placed position at the top of High Street.]

Later it was in private ownership, which is when I saw the deeds, and more recently it has been turned into six flats and named 1 to 6 The Old Court House.

The Royal Oak moved to its present position in Haw Street, apparently on the site of the former police station and Queen’s Head pub.

This names John Watts as still the sergeant at the Police Station and Petty Sessional Court, High Street.

Various documents up to 1894 show it as continuing to be there.

Two Kelly’s Directories say the Police Station was at the Town Hall.

In 1872 the Town Hall was rebuilt. Until 1884 it was a first-floor building held up by stone pillars.  That year the ground floor was enclosed. There appears to be a lock-up at the south-eastern corner with a small high window with vertical bars. This may have existed much earlier as there is mention in a lease of 1767 of “a room or prison at upper end of Market House”.

The position of the window can be seen in this 1985 photograph: 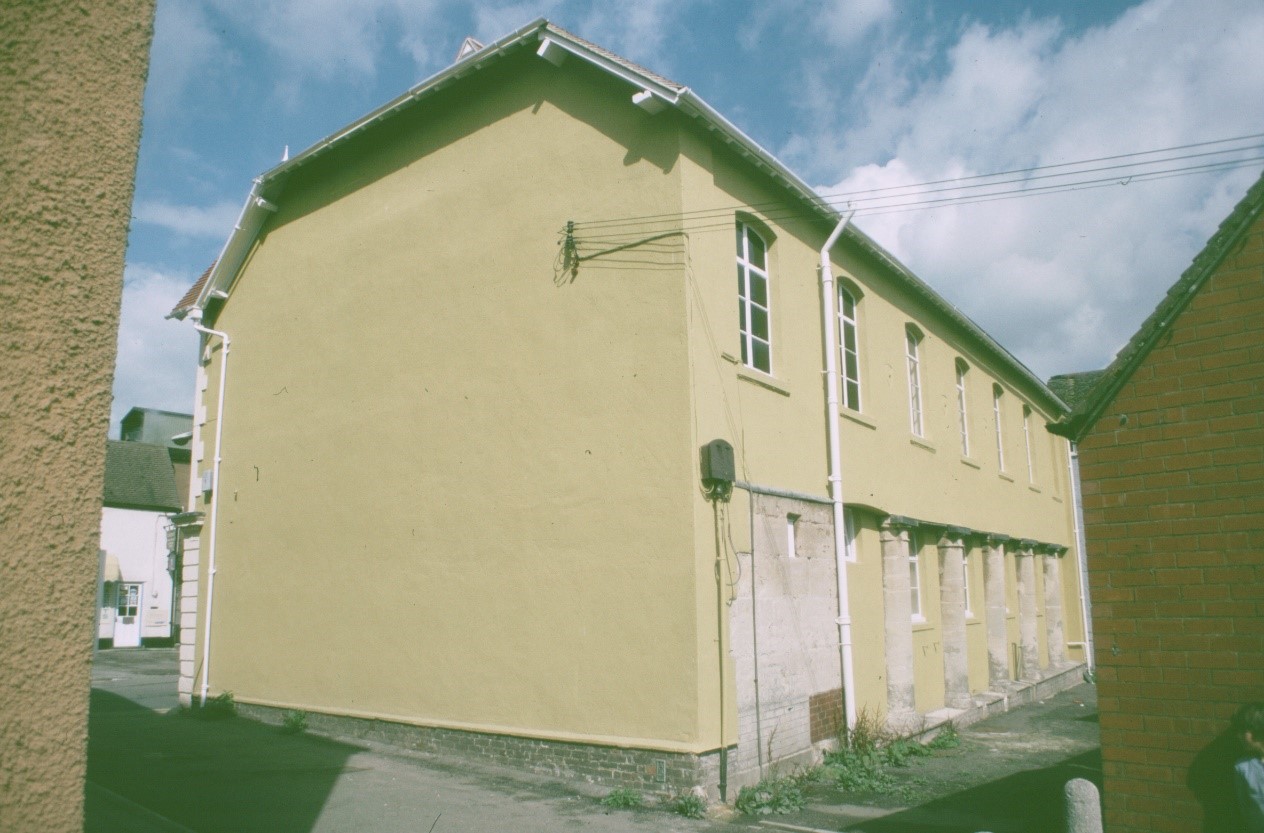 Given the different appearance of the wall, stone with no rendering, this may support it being the prison previously mentioned and having been enclosed earlier than the rest.  The small window had vertical bars. Five of the stone pillars are visible.

It seems most likely that the police continued to live at the Bradley Street/Haw Street building as the Town Hall would not make comfortable living accommodation. I have not discovered why the operations of the police station temporarily moved.

Various documents give the Police Station as being back in Bradley Street/Haw Street, with the names of the sergeants.

A pair of semi-detached houses added to the cul-de-sac end of Fountain Crescent as Police Villas 1 and 2 were first occupied in 1957 and continued in this role until around 1974. One map labels them as a police station, which seems unlikely. The 1978 O.S. map calls them police houses.

Electoral registers do not mention the Police Station in Haw Street/Bradley Street and by 1973 it was a private residence called the Court Galleries.  In the late 1960s the Dryleaze Estate was built. A Police Station flanked by police houses on either side in Dryleaze was added. The first occupants of numbers 1 and 2 Police House are in the 1969 electoral register.

This photograph was taken in 1996: 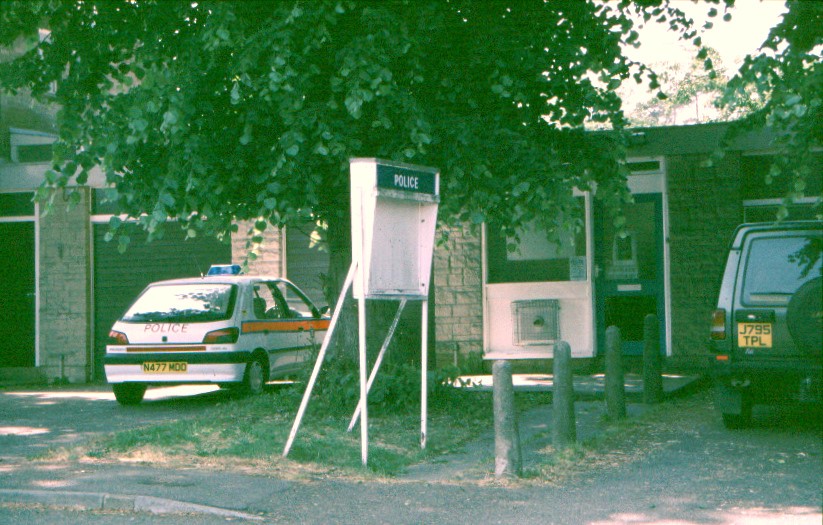 Soon after this, the property was sold off as two houses, 41 and 42 Dryleaze, and the police rented a property in The Chipping from the Town Trust, which had previously been used by the Town Council as offices for themselves and the CAB before the Civic Centre building was acquired from Renishaw and modified.

The Police Station in 2011 in The Chipping, leased from the Town Trust: 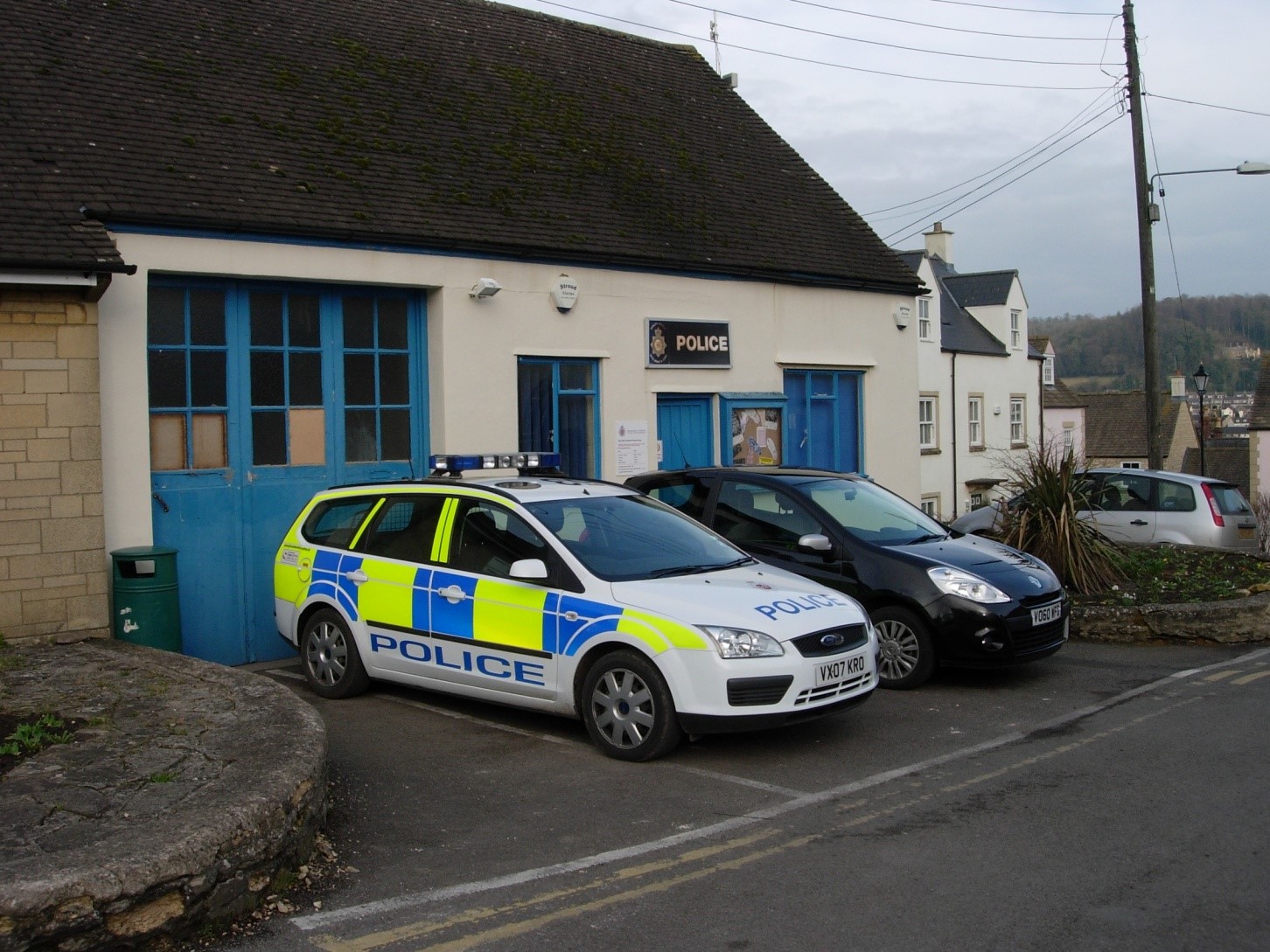 More recently the Police left the building and the Town, apart from a Policing Point in the Library. With the closing of the County Council Youth Centre nearby, the Town Council turned the former police station into a replacement youth centre.