While digging in her new garden in Mapstone Close Hambrook , Venish found the helmet plate pictured. 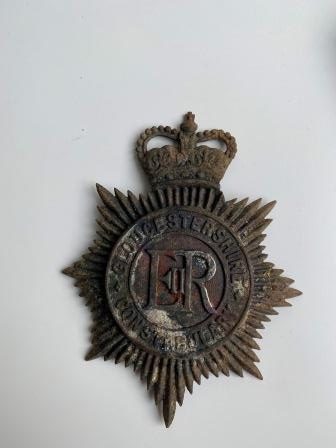 She contacted us and we were able to tell her that at one stage her house and the house next door had been police houses belonging to Gloucestershire Constabulary. This was before the boundary changes in 1974 that led  the transfer of Staple Hill Division to Avon and Somerset Police.  The helmet plate was of the type in use between 1953 and 1974. We are working hard to find out who may have lived in the house and lost their badge which originally would have looked like this.

We found the original site plans. 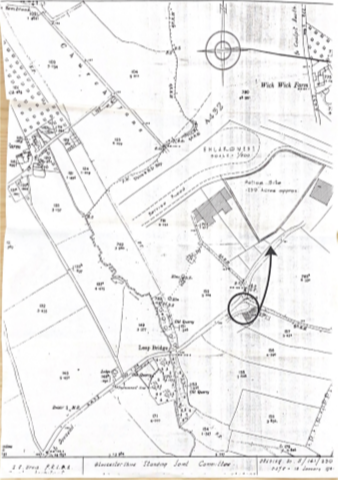 Looking at the voters registers for the time we found that the following officers lived there from the time that the houses were built around 1956 until 1974 when it became part of Avon and Somerset Constabulary.

We had the following memories of living in the Police House Hambrook from retired police officer Renae Evans whose father was also an officer with Gloucestershire Constabulary.

My dad was the last of the Gloucestershire Officers on the list attributed to the Police House on voters.  I have extremely fond memories of living there, and vivid memories of waiting for my dad to ride up on his police motorbike, stopping at the five bar gate and then letting me sit on the seat, at the age of 4 and believe I was riding the bike into the shed at the rear of the house! Realising many years later that dad was only pushing the bike, when he wasn’t sat on there with me!

The house we lived in was one of the two houses on the site at the time which were adjoined by the single police office situated between the two.

It was an idyllic location as a young child to live. Having chickens in the garden, watching the horses in the fields directly opposite our house, climbing in the huge trees that lined the front garden, building the open log fire in the front room and sitting room to getting up to mischief and being found by my mum sat underneath our round wooden dining table, all the chairs in place having found out how to open the drop down opening on the sideboard and tasting whiskey for the first time!!!!  Apparently I was only found because I was giggling so much….. I slept very well that afternoon. It will always hold a special place in my heart

I would love to think that this was my dad’s, but also can’t imagine it would have been lost by him without us having hunted high and low to find it at the same time!  I would love to know if you do identify who it belonged to.

We would love to have any other information or photographs to add to the little we know already and will pass it on to Venish.