You are here: Home>New contributions>Constable 653 Robert ‘Bob’ Stone and The Yangtze Incident

Thanks to the Stone family and HMS Amethyst Association 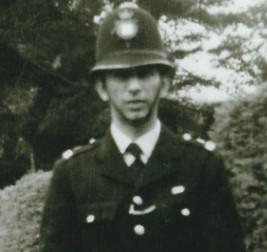 Robert Ernest ‘Bob’ Stone born 9th May 1929 joined Gloucestershire Constabulary on 27th April 1959 as Police Constable 653. He had previously applied to Devon Constabulary and later to  Somerset Constabulary but was turned down because of their age limit.

He served at the following stations

Before he joined  Gloucestershire  constabulary Bob served in the Royal Navy joining in 1945 serving for 14 years,  in the East Indies and the Far East including Singapore, .

In 1949 he was serving  as a telegraphist on board Her Majesties Ship (HMS) Amethyst in the Far East when the ship was fired upon by Chinese troops of the Peoples Liberation Army.

This became known as The Yangtze Incident and became  a film, released in 1957, starring Richard Todd as Commander Kerans.

Below is a personal account and recollection of Bob Stone during the incident, written for the HMS Amethyst Association newsletter 3rd  October 2014, just before his death in Cheltenham on 26th March 2014. 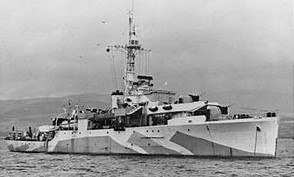 “Whilst serving as a telegraphist on HMS Amethyst in the Yangtze river en-route from Shanghai to the British embassy in Nanking some 200 miles, and whilst underway, at 08:30 am the ship came under fire from shore batteries of the communist forces massed on our starboard side”.

The shells from the shore batteries hit the bridge, wheelhouse and power room causing a large number of casualties. By the time the shelling had stopped at about 1100hrs, twenty two men had been killed and thirty one injured. This represents approximately 25% of the ships compliment. The ship received over 50 hits

“As a result of saving any further injuries the order was given to “abandon ship” with the idea to return to the ship when enemy bombardment next ceased”.

“The ship being stuck on a sandbank some distance from the main river bank at a place called ‘Rose Island’. I was one of many who obeyed the order and consequently jumped into the river and swam to the mainland a fairly short distance, together with wounded personnel in the available launches.

All the time the firing continued but now also at the swimmers making for the main bank who numbered about 70. Having got over the river bank it was a case of keeping your head down whilst crawling further inland. Hostile firing was still on, whether at survivors on the bank or shells that had overshot the ship.

From where I joined others we could see nationalist soldiers on the main bank across an inlet. They were waving at us but out of earshot.

A Chinese mess boy, who had joined us offered to swim over to the soldiers which he did. On his return, by boat he informed us that the area we were in was in fact mined and had with him someone who could guide us which he did. It was now getting on in the day so stayed where we were to wait further instructions.

After a while the destroyer HMS Consort appeared from the direction of Nanking. This was the ship we were on our way to relieve. As she reached Amethyst the gunfire was directed at her with which Consort replied in kind. This was in full view of us survivors and was in real life. After 3 runs/turns by Consort, still under fire, it was decided for her to proceed to Shanghai and call a halt to the action.

Amethyst was now completely at the mercy of the communist force with many of her crew ashore.

After consultation with the Nationalist soldiers it was decided not to attempt to return to the ship but make our way, with the wounded, to the nearest railway station hoping to make it to Shanghai.

Later in the day we commenced to walk as far as we could to pick up some transport of a kind. I remember arriving at a village during the night where we rested and got into some army tractor and went on our way to a nearby railway station. After a discussion it was arranged for coaches to be attached to the last train for Shanghai.

By this time an American doctor had arrived with medical material and made the wounded as comfortable as possible both at the station and on the train to Shanghai.

That train journey is a distant memory and I can only assume I slept most of the way. On arrival at Shanghai we were taken over by American Navy and were met by the worlds press and newsreels.

No great problems apparent on the journey but we looked a sorry sight with some wearing Chinese army coats and trousers. Then it was onto the British Embassy were we were allocated to various families for a break and most of all wash away the Chinese river residue on our clothes. I eventually finished up with a member of Barclays bank, or was it Shell oil.

I remember it was a weekend and we went to a burial service the following day at the cathedral for crew members of other naval ships involved.

After a weekend off I left my hosts and reported to HMS London for issue of emergency kit etc. and assisted the overworked communications staff whilst repairs were carried out.

When the ship left for Hong Kong I was transferred to HMS Black Swan and a short time later onto HMS Belfast which took me to Hong Kong. I was then drafted to MFV 1156 (naval) to work as anti-pirate patrol around the island.

I remained there until the Amethyst made her escape and I re-joined my ship for dockyard repair and the journey back to Plymouth, arriving 1st November 1949, and on to two months leave, with an order we would have to go to London for three days to attend a variety of ‘Welcome Home’ functions. First of all though was a march through Plymouth.

The visit to London was a variety of functions of marching through London, lunch at the Guildhall, a march from horse guards parade to be inspected by the king at Buckingham Palace, a gold dinner at Dorchester hotel and free entry to various pleasure shows”.

Reproduced with kind permission and thanks to the HMS Amethyst Association and Bob’s family.

Bob later became an active member of the Amethyst Association and served on the committee for many years.

This is a short introduction to the HMS Amethyst incident in the Yangtse River when she was fired on by Communist forces with heavy losses to herself and those ships that attempted to rescue her.

A problem with the 1957 film account is that the name of the locations in use in the 1940 and 50s are no longer used. Most of the modern day Chinese names have been identified, with two exceptions and the variations are noted on the Google map. There is still the question of the name of the river itself. In the event, both Yangtse and Yangtze has been used according to the sources quoted. 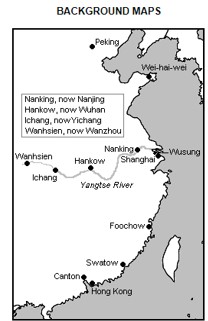 HMS Amethyst  under the command of Lieutenant-Commander Skinner sailed from Shanghai on 19th April to relieve HMS Consort at Nanking. Fired at on 20th at around 0800, 60 miles from Nanking and grounded on Rose Island with heavy casualties, about 60 – 70 crew landed and many made their way to Shanghai with Chinese help.

Note – Bob Stone was one of the crew of 70 who were evacuated at this time.

On the 21st at 0200, Amethyst refloated and anchored two miles above Rose Island. Later in the morning, London and Black Swan tried to close Amethyst but came under heavy fire, which was returned, and there were some casualties. Both ships returned to Kiang Yin where they were fired at again. Damaged and with more casualties, they proceeded to Shanghai. That evening, a naval officer and RAF doctor reached Amethyst by Sunderland flying boat.

On the night of 21st/22nd April Amethyst evacuated more wounded and moved ten miles up river to evacuate more.

She now had three naval officers, one RAF doctor, 52 ratings and 8 Chinese on board. On the 22nd, in the afternoon, Lieutenant-Commander Kerans, Asst. Naval Attaché at Nankin arrived to assume command. Also on the 22nd, another attempt was made to land  a Sunderland flying boat but she was driven off by artillery fire. Amethyst moved a further four miles up river.

HMS Amethyst remained there for three months before escaping on the night of 30/31st July. HMS Concord was present at this time.