The First Murder of a Gloucestershire Police Officer

In the early days of Gloucestershire Constabulary, the Forest of Dean was considered to be in a ‘most lawless’ state, sheep stealing and personal violence being very prevalent according to the diary of Superintendent Chipp.

On 16th August 1861 Sergeant Samuel Beard,  the station sergeant  at Littledean in the Forest of Dean, took a report from Farmer Guest of Flaxley that his sheep were being stolen from fields in the Speech House area . Sergeant Beard went with Mr Guest’s son to keep watch for the thieves that evening.

At eleven o’clock Sergeant Beard and Mr Guest  saw four men acting suspiciously near a field and decided to split up. When Sergeant Beard challenged the four men they  attacked him with clubs and cudgels and although the sergeant shouted  for help  Mr Guest insisted that he didn’t hear him calling out. He said that he  heard the sounds of the beating but thought that the men were beating a donkey. 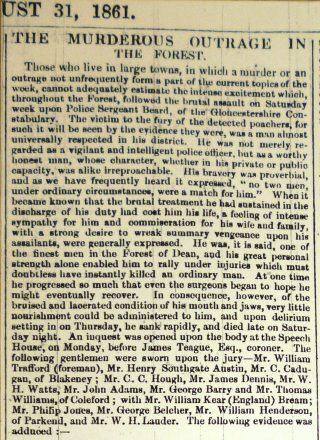 Introduction of the newspaper article found in Gloucester Journal 1861.

After the attack Sergeant Beard was left semi-conscious in a ditch but was not found until four o’clock the next morning when he was carried to Speech House. He had suffered serious injuries that included a fractured skull and every tooth in his upper jaw  was broken.

When Superintendent Taylor investigated the incident, at the place of the attack he found the cord-wood and  iron bar  that had been used in the incident. The next day four local men were arrested and taken to Speech House where Sergeant Beard was able to positively identify them and make a deposition in front of a magistrate. A few days later he died of his injuries.

He was thirty seven years old and left a widow and six young children. 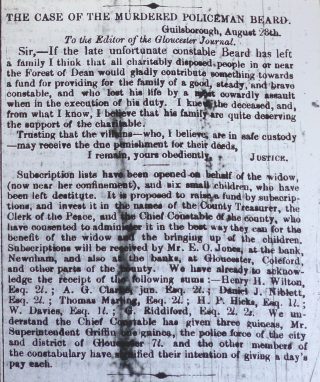 Article from the time about setting up a fund for the murdered sergeant’s widow and children.

Thomas Cooper,George Cooper, Richard Roberts and Thomas Gwilliam were each sentenced to fifteen years penal servitude after being tried for murder  at Gloucester Winter Assizes.

Thomas Cooper, George Cooper and Thomas Gwilliam were transported to Western Australia in below deck prison cages on board the Clyde convict ship in 1863. They were deployed on road works and other infrastructure projects around Freemantle. George Cooper died in Freemantle in 1865. Thomas Cooper was deployed on “ticket-of-leave” to the Gwalla copper mine, but died in a mining explosion in 1868. Thomas Gwillam was granted ticket-of-leave in 1866, a conditional pardon in 1871. He survived until 1914, having some further brushes with the law, suggesting his path was troubled.

Note on Ticket-of-leave: Issued as a reward for good behaviour and an indication that the bearer was no longer considered dangerous. Holders could hire themselves out, but had to attend weekly musters and meet strict requirements, or be recalled to Freemantle Prison. This system reduced the costs of feeding the convicts and provided the colony with much needed workers. Miners would be valuable workers.

Richard Roberts returned to Shortstanding, where he lived until his death in 1893. He had two daughters, both called Hannah and both died young (5 weeks; 5 years). He worked as a miner (but in 1891 he was on parish pay). 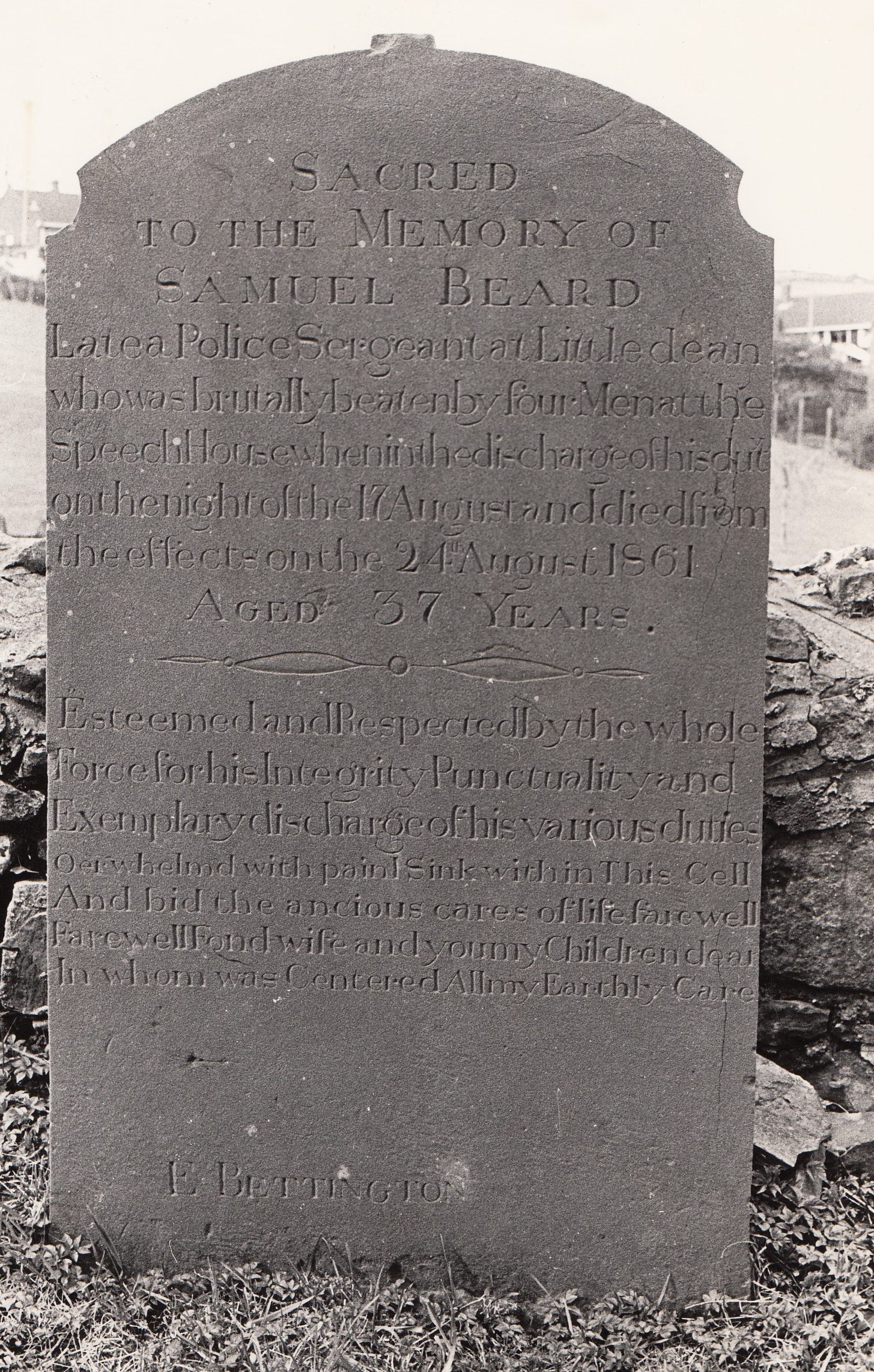 Gravestone of Sergeant Samuel Beard murdered in the Forest of Dean.