After war came peace and with it a quiet time for Special Constables, who continued to be part-time volunteers with day jobs. The Home office gave permission for Specials to retire after July 1st 1945, if they so wished and a gradual reduction to peacetime numbers took place. The Specials were allowed to keep a pair of uniform trousers from their wartime service and a Mackintosh or Great Coat for Civilian wear. Some of the former wartime camaraderie was maintained through social events at the Police and Special Constables clubs that had been established throughout the county at the start of the War. For those Special Constables remaining in the force, the Home Office granted them a boot allowance of a shilling a week. 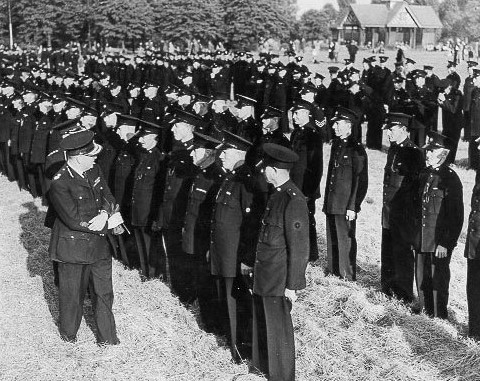 In 1949, there was much national concern regarding the threat of attack from the Atom Bomb and on November 14th 1949, the Home Secretary issued a countrywide appeal for volunteers for all areas of a newly formed Civil Defence Corps including the Special Constabulary. The advert for Specials that appeared in the Tewkesbury Gazette stated that men should be a minimum of 5’6″ in height and would be obliged to carry out duties to assist the regular police. In the event of war, they would undertake not less than 48 hours of duty per month consisting of several tours of beat duty and 12 two-hour sessions of training usually provided at police stations. Uniforms were to be provided (eventually) and out of pocket expenses and compensation for loss of wages would also be paid. The recruitment drive, however, suffered from a shortage of volunteers, as men feeling jaded by their years of war service were reluctant to come forward.

The quota of Special Constables for Gloucestershire was 2,000 but after three weeks, the number of new volunteers in the city of Gloucester alone had only just reached double figures and eleven months later just 136 new recruits had been taken on across Gloucestershire bringing the total number of Special Constables up to 1,100 or just over half the target. The story was the same throughout England and Wales and it’s unlikely to be mere coincidence that the country also saw its first women Special Constables recruited that same year. Women between the ages of 30 and 50 were now eligible to volunteer for the Special Constabulary as well as women outside this age group if they had previous police experience. The Civil Defence Corps lasted in Great Britain until 1968 when it was disbanded with the unspoken realisation that nothing practical could be done in the event of an all-out nuclear attack.

The duties of Special Constables post-war and up to the Seventies, were predominantly along the lines of crowd and traffic control for large gatherings. Examples of such duties included supervision of traffic flow through the town of Cirencester during a band concert in August 1948 and policing carnival parades in Tewkesbury and Stroud in 1949. Special Constables were required to assist the Regular Police at polling stations during election times as in Cheltenham in February of 1950 when there was a record turn-out of voters. They were also required to assist the Regulars in May of 1952 when in Tewkesbury centre the Battalion of the 1st Gloucestershire Regiment, consisting of 350 men and 20 officers, ceremonially paraded through the town with fixed bayonets and flying colours. A more specialised duty came in the form of a so-called “Turkey Patrol” set up in rural Gloucestershire during the month of December 1950 to deliver a strong message to would-be poultry stealers active at that time of year. Special Constables, often farmers themselves in the daytime, carried out night patrols, both on foot or in their cars, in order to apprehend thieves working under cover of darkness.

The Sixties were a time of rapid rises in the cost of living and the allowances paid to both men and women Special Constables were increased on at least three occasions. At the end of 1965 the Special Constabulary consisted of 788 personnel comprising of 6 Superintendents, 1 Chief Inspector, 21 Inspectors, 65 sergeants and 695 constables, with an unspecified number of these being women. In September 1966, the Queen officially opened the River Severn Bridge and 450 Police Officers were in attendance including a mix of Regulars and Specials. During 1967, thirteen long service medals were presented to Special Constables and the British Empire Medal was presented by the Duke of Beaufort, on behalf of Her Majesty, to Special Superintendent G.C.G. Clifton of C Division Special Constabulary. By 1970 the number of Specials had fallen to less than 700 and only eight new recruits had been appointed during that year.